We all love spoil(er)s right!?

Spoils of war is a coming term among the players who play “real magic”.

You know the thrilling feeling you get whenever you are surprised with a gift and have no clue whatsoever might be inside?

I believe it’s the unknown combined with the fact that your reactions to the content will tell whatever you feel about it. You don’t want to hurt the feelings of the bringer of such gift if it’s something unwanted and…you might feel anxiety and noxious all at ones.

This is the same kind of feeling I get whenever I win or loose a battle of wits and get to turn the anted card face up.

Will I loose or win big or small!?

Another feeling connected to this could of course be the excitement, right?

Well well. Needed to get that out of the system, time to tell you about something I think is really exciting.

There is a great amount of excitement whenever there is spoiler season for a new set. At least I thought so a couple of years ago when I actually cared about new magic sets and whatnot. These days I rarely look at spoilers as the only format I usually play is Oldschool.

I remember how it was prior to new releases with all the cool stuff spoiled every day and sometimes I follow a spoiler season for new sets just to itch that nerve…but it’s not quite the same when you know you are not going to chase the new cards down and start brewing with them in real life.

This time it’s different as I will actually both enjoy the spoiler season and the chase afterwards (or actually going on) as the cards will affect me and the format I actually play.

Will you stop all the nonsense and come to the point already!

OK, no more messing around with fancy words about feelings and such. Let’s get to the point!

It’s spoiler season and we (the ante group of the world) have got a juicy one for you!

We love signing contracts and getting screw by others, unlike Tarenah, who probably lived in the Suq’Ata Empire in northern Jamuraan during the Mirage Wars. Event though Suq’Ata suffered the least during the war I believe that Breathstealers brought some evil with them. The noble people living on trade maybe wasn’t prepared for this change and might as well thought their trading skills where plain awesome.

But we all know that you can’t be to careful when it comes to dealing an wheeling with the evil of any world and especially hell. Tarenah clearly didn’t know that!

With that said I think it’s time to reveal what you have come for. Let’s meet… 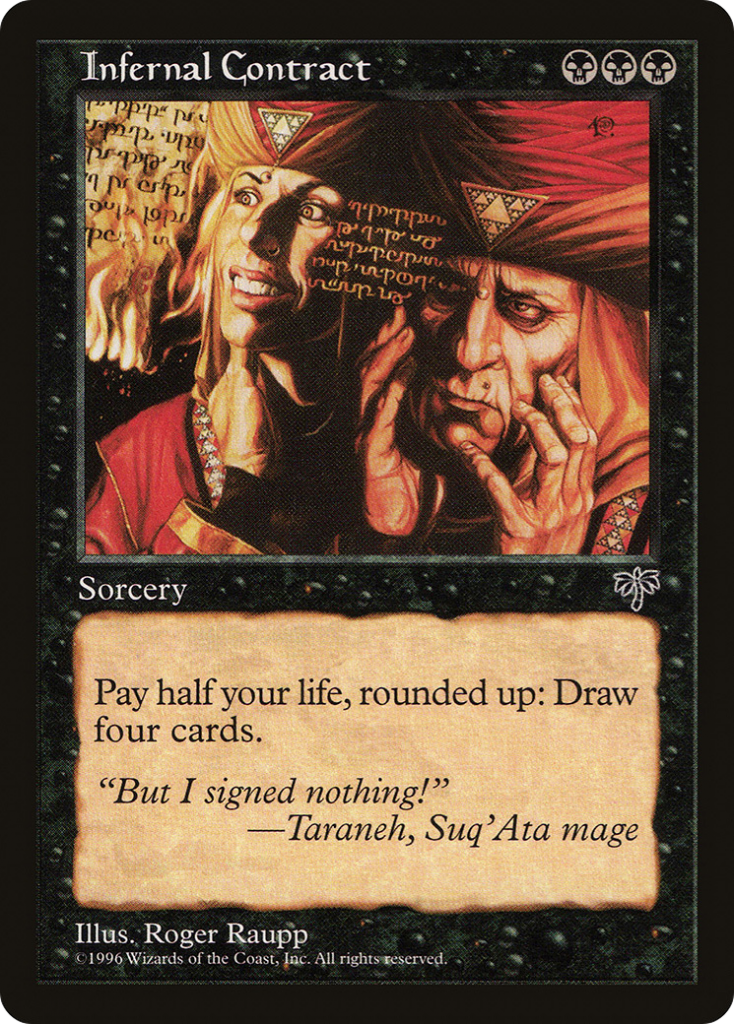 Well that is a proper magic card fit for any misfit ready to give some and get some.

The art, flavor and name all fits perfect here in hell. This is the kind of stuff we all love!

Can’t wait to start brewing with this and especially start jamming games with it.

Don’t forget that when it comes to contracts, first READ, then sign and finally…

← Tales of the Ante40K community
Worlds farthest up Ante Gathering →